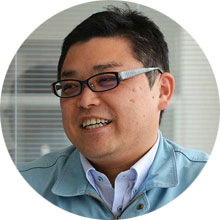 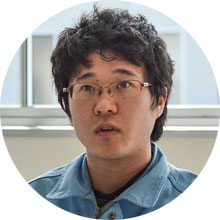 A welding site issue: the threat to the survival of craftsmanship

One issue faced by Shibahara Manufacturing Industry is how to pass welding techniques on to the next generation. Welding relies on skills and intuition gained only from long years of experience. The technologies boasted by Shibahara Manufacturing Industry are supported by highly skilled craftsmen, but—if there are no successors for these skills—both the survival of the skills themselves and the company's product quality will be threatened. However, the past "Showa-style" inheritance of skills by craftsmen is now impractical from the standpoint of securing personnel, making working styles more efficient, and other perspectives.
Shibahara Manufacturing Industry's main products are cabinets for storing and protecting distribution boards and various other types of power-distribution and control equipment. Although these products look like nothing more than simple metal boxes, the nature of the products necessitates the maintenance of quality, and the products must be able to handle various usage environments—including both indoor and outdoor environments—as well as equipment to be stored that differs in size or structure. In other words, the company's products require flexibility in many ways, which means it is necessary to rely on craftsmanship. 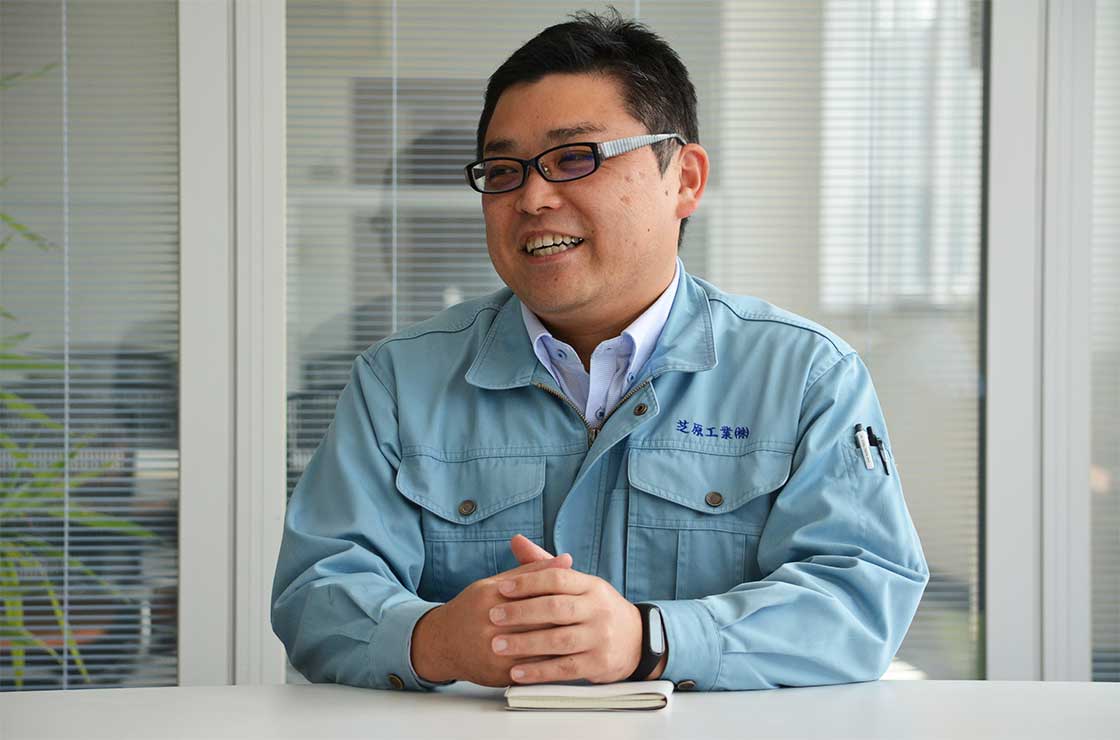 President Toshiyuki Shibahara had considered the above situation and had been aware of welding automation for several years. He even discussed the possibility of such automation with several companies that develop industrial robots. However, due to the high precision requirements of TIG welding, robotizing such welding is difficult, so SIers recommended automatic welding with wires to him. Unfortunately, it would not be possible to maintain product quality with such welding. Most of the TIG-welding robots on the market are used only for the mass production of products with simple shapes. In the case of mass production, repeated operations are possible after teaching robots once, but a company like Shibahara Manufacturing Industry that specializes in low-volume production would have to separately teach robots in line with each workpiece.

Mr. Shibahara : Due to the enormous costs of both the required equipment and development, the conventional approach made no business sense, so we couldn't introduce it. That said, it is in fact possible to automate TIG welding by using robots, so I suspected we might be able to find a good way. 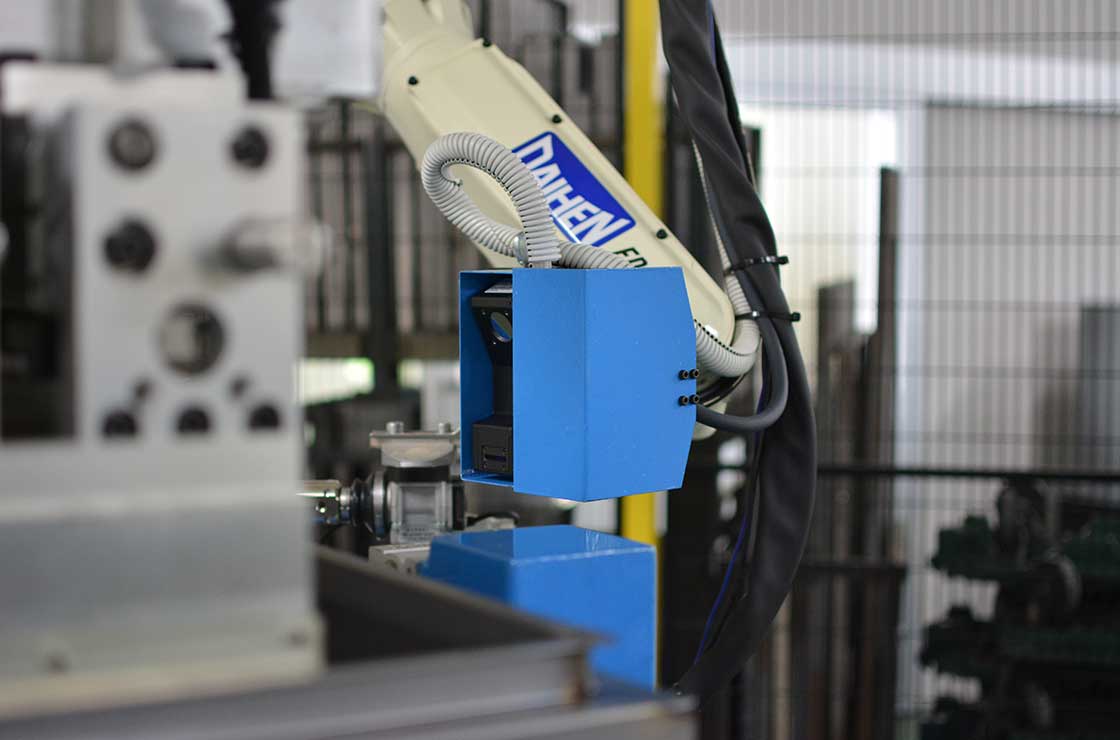 A clue to solve the problem: Is the world of science fiction right here at LINKWIZ?

Mr. Shibahara found a clue to solve the problem surprisingly quickly. When he mentioned his problem to Mr. Fukino, the President of LINKWIZ and someone he had been interacting with for a while, Mr. Fukino immediately said, "No problem! Welding robots are actually a specialty of ours." Given the reluctance Mr. Shibahara had seen from so many SIers, he wasn't exactly convinced by the clearly self-confident Mr. Fukino. However, Mr. Fukino's explanation that point cloud data read using a 3D scanner could be automatically corrected by a robot seemed convincing at least in theory. LINKWIZ's L-ROBOT is a robot teaching autocorrection system. With this system, the robot automatically corrects movement in line with the target workpiece. Although past robots were in fact capable of making two-dimensional corrections—such as horizontal deviation—they could not correct the height and were therefore confined to two dimensions, but L-ROBOT enables corrections in line with three-dimensional shapes. Therefore, this system eliminates a number of barriers in one fell swoop, including the issue of slight shape and strength differences between workpieces as well as the need to constantly reteach. This was exactly what Mr. Shibahara had asked SIers about the possibility of, even though he figured it was little more than a pipe dream. When he heard about what LINKWIZ was enabling robots to do, it felt like the world of science fiction had become a reality. He was genuinely surprised to find a company commercializing such technology. Therefore, after confirming the possibility of the operations he had in mind at LINKWIZ's laboratory, he decided that LINKWIZ's L-ROBOT might make his goals attainable, which was a crucial first step.

However, it took a bit longer before the company actually introduced L-ROBOT. At first, the company could not find an SIer willing to put together the robots necessary to introduce LINKWIZ's system. However, one company eventually made a bid for this ambitious project: the Hyogo Prefecture-based SIer TAKAMARU Engineers CO., LTD. This company used a broad perspective—by avoiding getting too fixated on any specific robot manufacturers—and advanced technologies to boldly take on the challenge posed by TIG welding and gradually build a system reminiscent of science fiction. 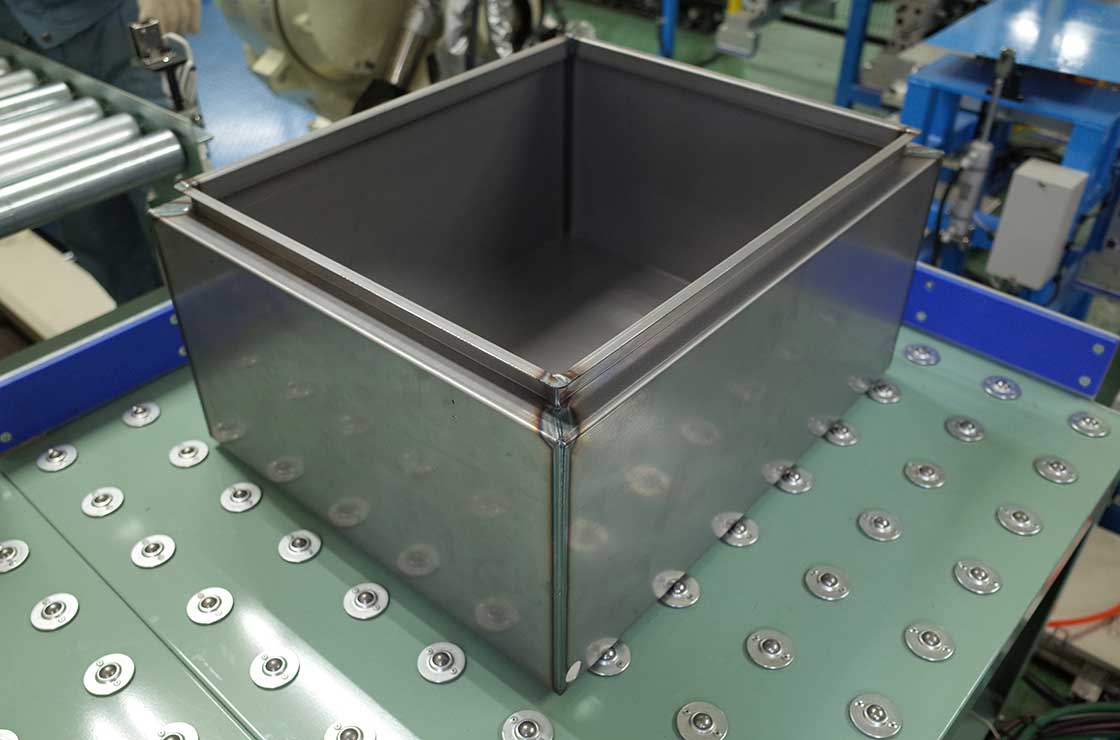 The start of operations: what robots gave to people

After around two years, two TIG welding robots were set up in a corner of the company's factory. One robot was for bringing in and holding workpieces, while the other was for welding them. These robots functioned as a pair to do work. Although the robots have not been there for long and there are still many things to figure out and cases where the experience and intuition of craftsmen are necessary, the welding done by the robots so far has been beautiful and better than imagined.

In addition, the introduced robots did more than just achieve uniform, accurate welding in place of people. They also changed the people working there. In order to fully demonstrate the power of the new robots, people throughout the factory started reviewing how they made things. There was suddenly a new interest in finding ways to share the skills of craftsmen and unify them. As a result of introducing the robots, people realized that it wasn't good enough to simply leave things that involved reliance on the intuition of people vague. The atmosphere of the site changed to one in which people try to make implicit knowledge explicit and visualize it to increase productivity and more effectively utilize robots.
Kosei Hirao—who had been with the company for five years—was put in charge of operating his new robotic "colleagues" full-time. Until then, his work was related to deburring, tap-hole processing, stud-bolt attachment machine operation, etc., so he didn't have any experience with welding as a job. Therefore, he had to acquire various skills related to the introduction of robots. He started studying how to read drawings, program CAD/CAM, and weld, acquired robot operating qualifications, and studied both robot and L-ROBOT programming. Now that he has a foundation, he is branching out to derivative fields, including improving the takt time of robot operations and enhancing related safety measures.

Mr. Hirao : Simultaneously handling robots and software seems hard at a glance, but LINKWIZ provides plenty of support, so it never actually felt that hard to me. On top of that, my company has not imposed any strict deadlines or time constraints on me. Therefore, I just do things as I notice them, sort of like an adventure. (Laughter)

specifies the initial operations, manipulates the variables, and actively makes other adjustments, including changing the operational details. Although he does not have any robot-teaching experience, he is learning what to do through free thinking.

Mr. Shibahara : There were several candidates for our full-time robot manager, but I felt like Mr. Hirao was the right man for the job due to his personality, including his tendency to think logically and notice little details. Sheet-metal processing is a lot like folding sheets of metal origami paper. Once we receive three-dimensional pictures from customers, we start by essentially unfolding them into a single sheet. We take a look at the drawings and instructions, and then we consider details that include the material and sheet thickness as well as the machining stretch to make our own calculations. As long as that groundwork is laid, it can be applied to the handing of robots as well, and I wanted to pick a candidate who could understand that.
Once the operation of our robots started, Mr. Hirao was extremely aggressive and independent in his efforts to handle our robots. Eventually, I'm sure someone else will take over those duties, but I hope they will not only use our robots as he does but also inherit his fine attitude. 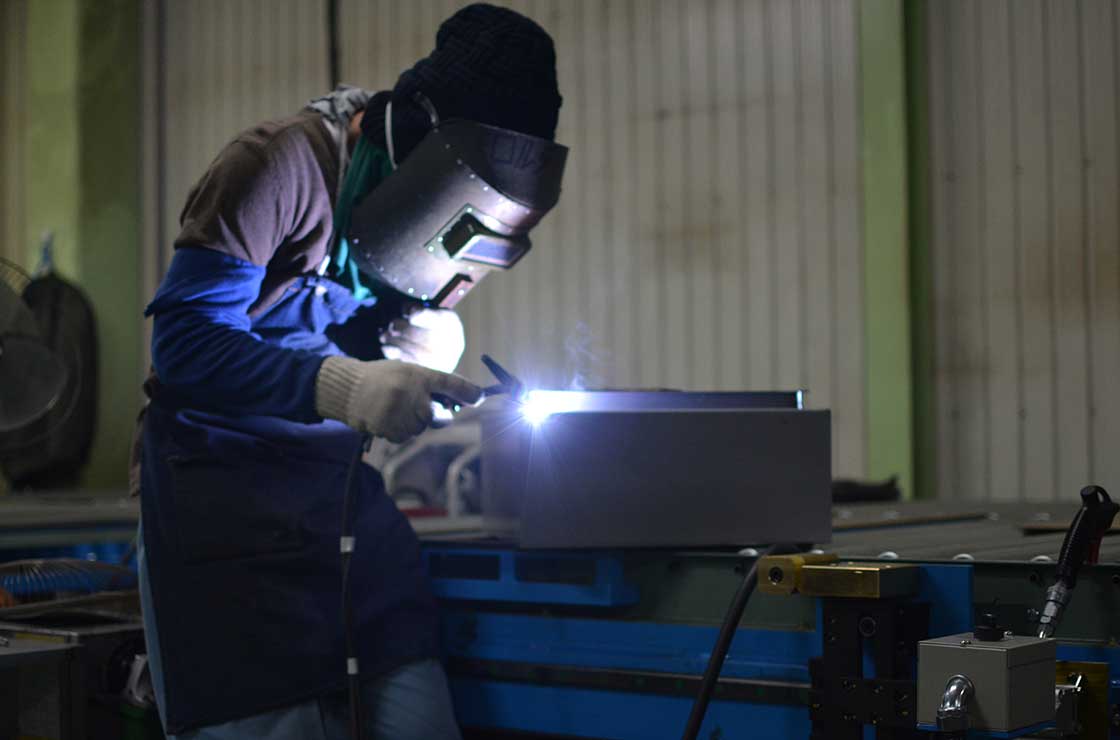 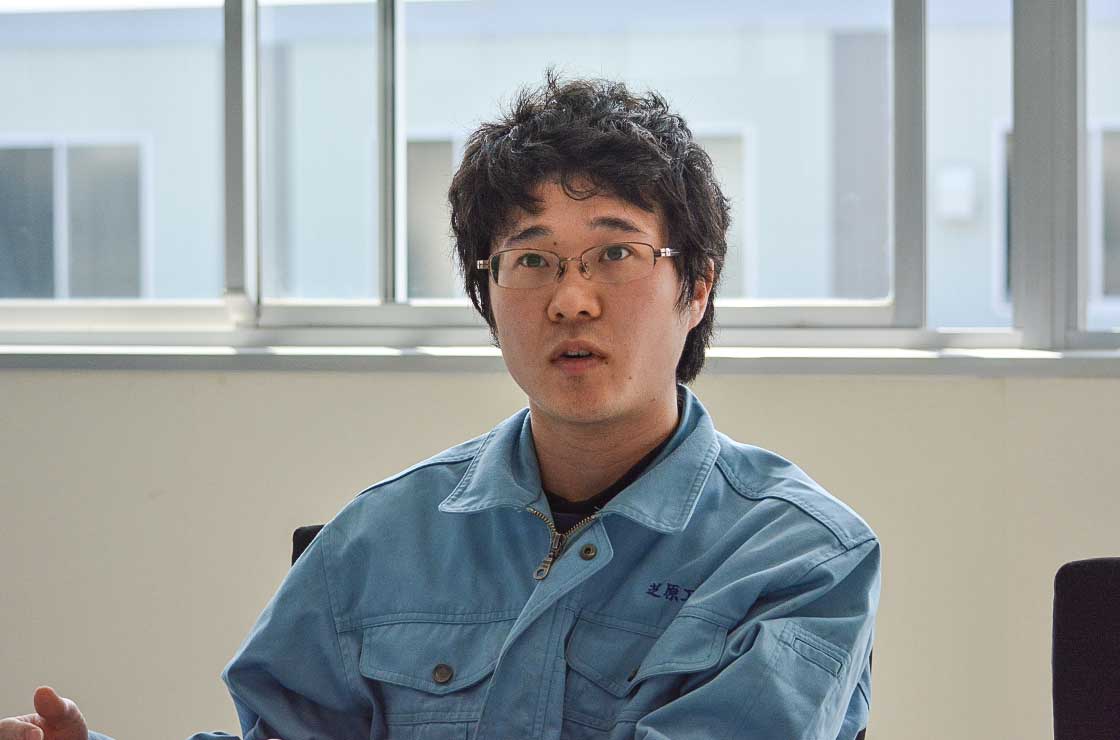 In an effort to resolve the issue of how to pass on craftsmanship, Shibahara Manufacturing Industry has started working on making its welding intelligent. Although certain aspects of the company's process still require the involvement of craftsmen, the company is already feeling the effects of introducing robots.
Shibahara Manufacturing Industry—which is engaged in high-mix low-volume production—must create new systems for each new low-volume batch of products. Therefore, one issue the company faces is how to do this as efficiently as possible. As robots work, the company's employees write the next program, aiming to achieve a system capable of the high-mix production of one product after another. Right now, someone has to watch each robot all the time, but it would be best if robots could work independently without constant supervision by people or if each person could manage multiple robots. The company has only taken its first step towards achieving a smart factory.

Mr. Shibahara : Robots can basically do anything if you program them to, but creating each program takes time. This makes it difficult to find solutions to handle our company's high-mix low-volume situation. We need robots that can enable us to compete with companies that rely on manual work or special-purpose machines for production. This means we need know-how related to the use of sensors and software to make teaching corrections, and we expect LINKWIZ to keep providing their support in this regard. I believe that robots are a tool for enabling people to work more productively, not just a means of achieving labor saving or automation. There are many kinds of work that can only be done by people, so I think the use of robots can actually increase the value of such work. I hope that LINKWIZ will keep coming up with new ideas for solving problems.

Mr. Hirao : People expect a lot of our in-house robots, so I want to increase their productivity. One issue is how to improve the takt time, so I expect LINKWIZ to develop new analysis methods and upgrade their software. In terms of the hardware, I feel like there is still room for improvement, including scanner rotation, so I hope TAKAMARU Engineers will work on that, too. 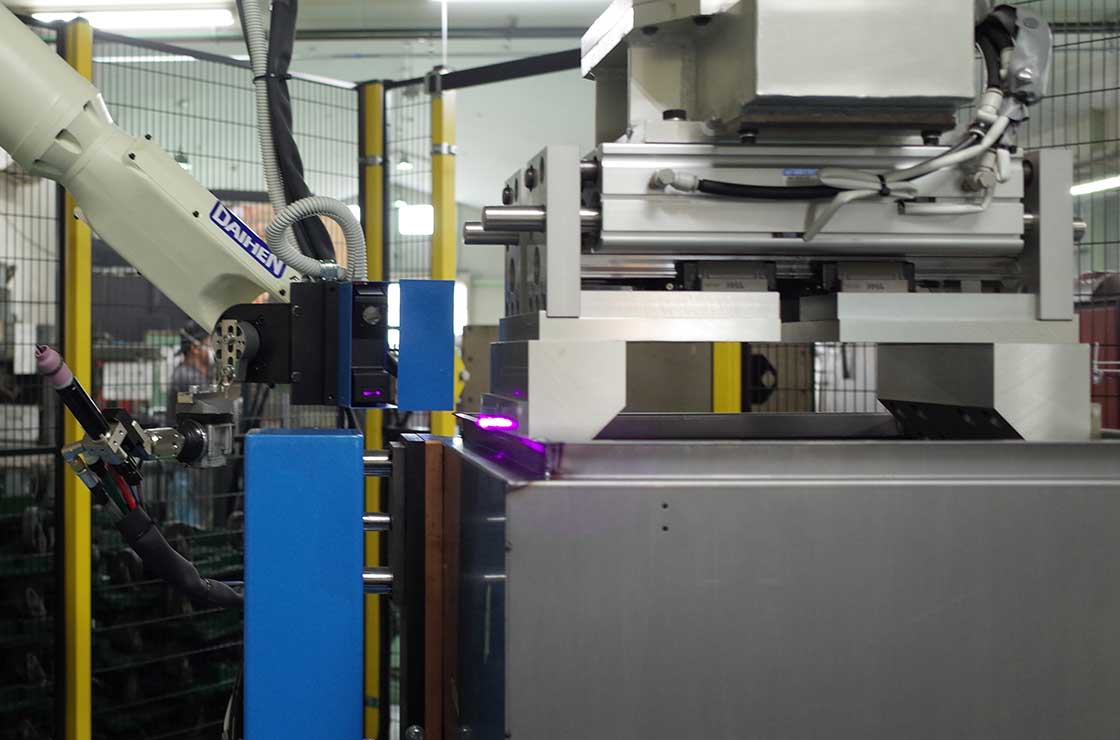 Shibahara Manufacturing Industry Co., Ltd., which is located in an industrial park near the Tenryu River in Iwata Shizuoka, manufactures various types of sheet-metal products. The company actively works on making welding techniques more intelligent and is involved in regional-core-company creation/support projects as well as projects that drive regional economic growth based on the Regional Future Investment Promotion Act of the Ministry of Economy, Trade and Industry. 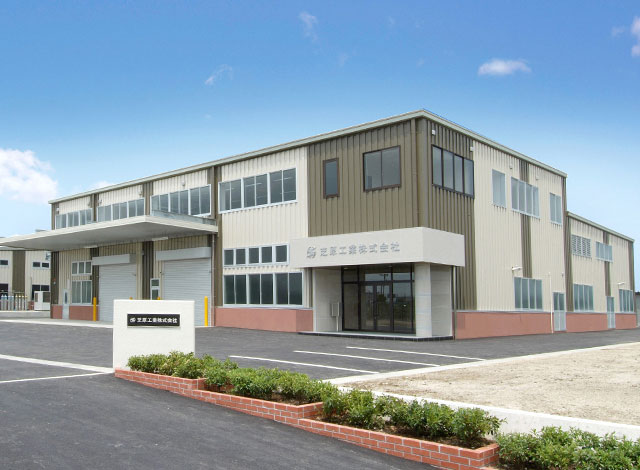 If you have any questions or concerns regarding industrial robots, please feel free to get in touch with us.